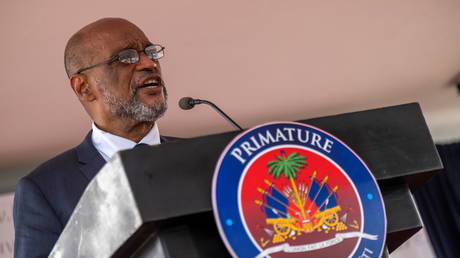 A Haitian prosecutor is seeking charges against PM Ariel Henry over an alleged link to the murder of late President Jovenel Moise. He has also asked for a restraining order to prevent the official from fleeing the country.

The high-profile accusations were levied by Haiti’s chief public prosecutor, Bed-Ford Claude, on Tuesday. In a letter to a judge overseeing the probe into the July assassination of Moise, Claude said the PM spoke to the prime suspect twice on the night of the killing.

The suspect in question is a former Justice Ministry official who is now on the run. Henry had previously publicly defended the suspect.

“There are enough compromising elements … to prosecute Henry and ask for his outright indictment,” Claude wrote.

In a separate letter, Claude also reached out to the nation’s Customs Service, demanding an immediate restraining order be issued against the PM to prevent him from potentially fleeing Haiti. Henry should be “forbidden from leaving the national territory by air, sea, or road due to serious presumption relative to the assassination of the president,” the prosecutor wrote.

Also on rt.com
US military helped train some of the Colombian suspects in assassination of Haitian president, Pentagon admits


The PM’s office is yet to comment on this new twist in the Moise assassination saga. The late president was slain at his home on July 7 by a group of heavily armed assassins who stormed his residence. Moise’s wife was seriously injured in the attack.

The mercenary group allegedly primarily consisted of Colombians with military backgrounds, and included at least two Haitian Americans. Several mercenaries were slain by Haiti’s security forces in the wake of the assassination. While the majority of the group of suspects have been detained, a handful of the alleged assailants remain on the run.