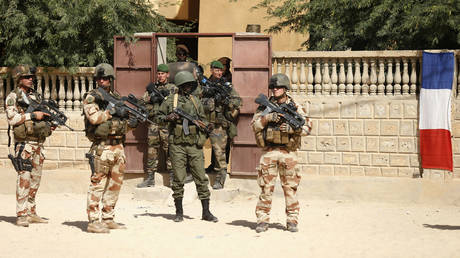 The commander of the Islamic State in the Greater Sahara was killed in a French military operation, President Emmanuel Macron said in a tweet. The jihadist cell was active in the Mali-Niger border region in the African Sahel.

“Adnan Abu Walid al-Sahrawi, leader of the terrorist group Islamic State in the Greater Sahara, was neutralized by French forces. This is another major success in our fight against terrorist groups in the Sahel,” Macron tweeted in the early hours of Thursday morning, though offered no details about the operation.

Al-Sahrawi declared allegiance to the Islamic State in 2015, and his group is believed to have carried out several attacks on local and foreign troops in the Sahel region, including a 2017 ambush on Nigerien and American soldiers outside the village of Tongo Tongo in Niger. Al-Sahrawi’s group claimed responsibility several months after the attack – which killed five Nigeriens and four Americans – and Washington later put out a $5 million bounty for information on the commander’s whereabouts.

Also on rt.com
Over 50 reported dead in terrorist attacks by suspected jihadists in Mali


He was added to the United Nations terrorism list in 2018 for association with the Islamic State and al-Qaeda, and is also accused of involvement in kidnappings of foreigners, including Kenneth Elliot, an Australian citizen.

Prior to proclaiming loyalty to IS, al-Sahrawi served as a spokesman for the Movement for Unification and Jihad in West Africa (MUJAO), a splinter group of al-Qaeda in the Islamic Maghreb, an affiliate based in countries across North Africa, according to the UN.

French forces have embedded with local troops for its massive Operation Barkhane, a multi-national counter-terrorism mission that launched in 2014 and is active in several former French colonies in the Sahel region, including Burkina Faso, Chad, Mali, Mauritania and Niger. Barkhane followed Operation Serval in 2013, in which French forces helped to retake swathes of northern Mali from Islamist groups. The sweeping, ongoing mission is also supported by American and British forces – though US involvement became more controversial when it was revealed that American troops provided training to Colonel Assimi Goita, a Malian military commander who led two separate coup attempts between August 2020 and May 2021.

...
Draghi: lo Stato sia pronto ad aiutare imprese e cittadini nella transizione ver...
Love You @justinbieber ...
: @rorykramer...
#RedPillBill #JoeDraculaBiden #RoboCopAlex @RealJamesWoods @SenSchumer @AOC @Sp...
SGX CEO on initiatives to attract SPAC listings to Singapore, tech IPOs
Scuffles in Munich as police use batons & pepper spray against eco-protesters picketing Germany’s bi...
"Harleys In Hawaii" Music Video by @katyperry is back to 181k daily views And th...
Haqqani meets head of UNHCR KABUL: (AIP): Acting Minister for Refugees and Repat...
reference: @rihanna ...
As legit if not more so than anything the administration has told us in a few we...
برلماني: توجيهات الرئيس السيسي بشأن الصادرات والواردات تضع مصر على خريطة التجارة...
1 year ago today, @ladygaga posted this adorable video via Instagram ...
US-Apple-Books-Top-10 - ABC News - via @ABC #BookRecommendations #top10 #Apple...
Hey siri play 22 by @taylorswift13 ...
Sydney lifts Covid curfews as case numbers stabilise
happy #devastatedday ...
Dixie D'Amelio Rocks a Feather Dress As She Arrives at Justin Bieber's Met Gala ...
Lately I'm feeling so blue I know you're feeling it too If it's all getting way...
Had a dream that @ArianaGrande was pregnant and I fucks with it heavy...