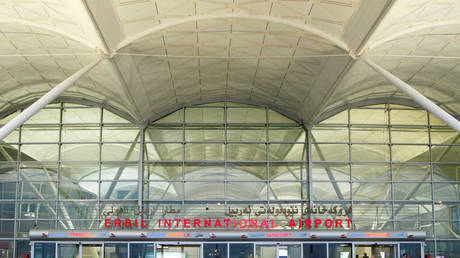 Footage from witnesses has captured multiple explosions at the Erbil International Airport in Iraq’s Kurdistan region. The blasts were apparently from a drone strike targeting the airport, which is used by the US-led coalition.

Local media reported, citing Kurdistan Region’s Directorate of Counter Terrorism (CTD), that “explosive-laden drones” targeted the air hub, which is hosting US forces that are part of the multinational coalition against Islamic State (IS, formerly ISIS) in Iraq.

At least six blasts were heard in the vicinity of the airport, Reuters reported, citing witnesses.

Lawk Ghafuri, head of Kurdistan’s foreign media relations, confirmed the airport was attacked “with a drone,” dismissing reports of casualties or damage as false.

The drone was carrying explosive devices, and exploded away from Erbil International Airport’s terminals and territories. No casualties are reported.

Ghafuri said the explosion was “away from Erbil International Airport’s terminals and territories.”

The official also brushed off reports that the attack forced the airport to shut down, calling them “fake news.”

#Erbil International Airport is open and flights are normal. Again any rumors about the closure of the airport is fake news.

Footage from the ground has been spreading across social media, purportedly showing warning sirens going off at a military base housing US troops.

Missile defense systems were deployed to repel the attack, a source with the coalition forces told the media. It is unclear if the drones targeting the airport made an impact, the source said, noting that an investigation into the incident is still underway.

Initial reports carried by the Kurdistan’s counterterrorism service claimed the airport came under a rocket attack.

The air hub has faced multiple attacks this year, and US officials have chalked up the aggression to militia groups targeting the US service members still remaining in the country.

The strike comes as the US marks the 20th anniversary of the 9/11 terrorist attacks that killed nearly 3,000 people, and which the George W. Bush administration used it as a pretext to invade Taliban-controlled Afghanistan in 2001.

Canada’s the best country in the world. -Justin Bieber…

Nigeria: Deadly attack on village in northwestern state of Kaduna

‘Shown their place’: Muslim livelihoods under attack in India

SPD ‘rising from the ashes’ but falls short of ‘impressive victory,’ leaving any coalition option on the table