Czech Republic might have to destroy 45,000 AstraZeneca doses as demand for the jab nosedives – media — RT World News 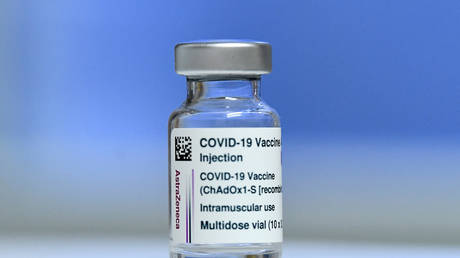 Prague might have to dispose of thousands of AstraZeneca’s Covid-19 vaccine doses, as they expire next month. The demand for the jab recommended only to those over 60 years old due to possible side effects remains low.

Some 55,000 doses of the vaccine manufactured by Anglo-Swedish company AstraZeneca and shipped to the Czech Republic are set to expire by the end of October, Czech radio station IROZHLAS reported. While about 10,000 of them are expected to be used to administer second doses, the remaining batches might have to be incinerated if the demand for the jab fails to shoot up.

So far, it has been at rock bottom. According to the data cited in the report, only 36 people have chosen AstraZeneca for their first dose in September, and a total of 774 people have been vaccinated with it so far.

During July and August, only about 1,200 of those newly vaccinated opted for AstraZeneca’s vaccine, a tiny fraction of the 860,000 people who applied for their first dose within that period.


More than 14,000 doses of AstraZeneca’s vaccine were thrown away in the past month alone due to the lack of interest from the public, Czech media reported.

Its apparent lack of popularity has been blamed on the fact that since June, the Czech health ministry has recommended that the AstraZeneca and Johnson & Johnson Covid-19 vaccines only be given to those older than 60. The precaution was introduced after the vaccines were suspected of causing potentially deadly blood clots detected in some younger people after they received the jab. Although the cases are reported to be rare, several countries, including the Czech Republic, limited or halted the use of the vaccine.


The spokesman for the Czech Ministry of Health, Daniel Koppl, said the government doesn’t expect the outstanding doses to be used before time runs out. And while Prague recently donated over 200,000 doses of AstraZeneca to other countries, this time the batches can’t be salvaged due to legal hurdles, he told Radiozurnal over the weekend.

The problem is that the unused doses have already been delivered and distributed across the country. “The law does not allow us to donate these vaccines, because the moment they are removed from the controlled distribution chain, they are expected to be used. They cannot be passed on,” Koppl said.

So far, 55% of the eligible Czech population has been fully vaccinated, while the authorities set a 75% vaccination rate as their target.

Canada’s the best country in the world. -Justin Bieber…

Uber and Bolt struggle to meet demand in the U.K.

Aussie PM offers lockdown-frustrated people ‘gift’ of getting their lives back, but with QR codes & other measures in place — RT World News

don’t dream it’s over Hey now, when the world comes in They come to build a wall…

Germans vote in historic election, with Angela Merkel set to step down after 16 years in power — RT World News

ariana grande, the best woman in the entire world. …