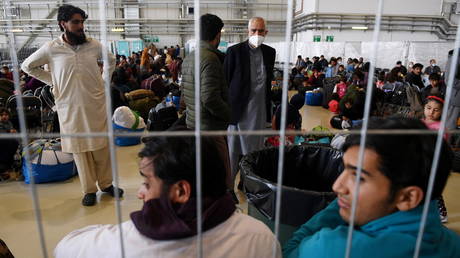 Vienna will take no part in the resettlement of Afghan refugees evacuated from Kabul after the Taliban takeover, said Austria’s chancellor Sebastian Kurz, insisting that the country already has enough migrants from Afghanistan.

The US and its allies have flown more than 123,000 civilians out of the Afghan capital Kabul after it fell into the hands of Taliban militants in mid-August. Most of them are going to be provided asylum in America, but the EU also agreed to resettle 30,000 people. While Germany and France showed eagerness to accept the Afghans, Austria was among the nations that blatantly rejected the idea.

“We won’t welcome any fleeing Afghans into our country as long as I’m in power,” Kurz reiterated on Tuesday in his interview with Italy’s La Stampa newspaper.

The Austrian government’s position on the issue was “realistic” and didn’t mean that there was a lack of solidarity with other EU capitals on the part of Vienna, he insisted.

“After more than 44,000 Afghans arrived to our country in recent years, Austria already hosts the fourth largest Afghan community in the world” per capita, the chancellor reminded.

The problem is that “integration of Afghans is very difficult” and requires extensive efforts that Austria simply can’t afford at the moment, the 35-year-old conservative politician said. They mostly have a low level of education and completely different values compared to the rest of the country’s population, he pointed out, adding that more than half of young Afghans living in Austria supported religious violence.

Also on rt.com
EU is split on taking Afghan refugees, and it’s hard to blame those who don’t want another mass influx


But Vienna was still eager to help the distressed Afghans, as it was allocating 20 million euros to assist Afghanistan’s neighboring countries in resettling the refugees, Kurz revealed.

The swift offensive by the Taliban, which saw the radical group claiming most of the Afghan territory and recapturing capital Kabul in a matter of weeks amid the withdrawal of US troops from the country, “took everyone by surprise,” the chancellor acknowledged.

EU members “must now exert massive pressure on the Taliban so that they would continue to respect women’s and human rights. The progress made over the past 20 years must not be undone,” he added.

However, EU policies from the times of the 2015 migrant crisis – when hundreds of thousands of people fleeing conflict in North Africa and the Middle East were let into the bloc – “can’t be a solution for either Kabul or the European Union” anymore, Kurz said.

The Austrian leader insisted that it was “now clear to all European governments that illegal immigration should be tackled and that Europe’s external borders should be made secure” to solve this problem.


He believes that the block must work to break “the business model” of human traffickers who deliver people to Europe. As for the migrants, they should be turned around at the EU borders and sent back to their countries of origin or to safe third-party nations, Kurz explained.